Skinless: The Story of a Female Survivor. My Why? 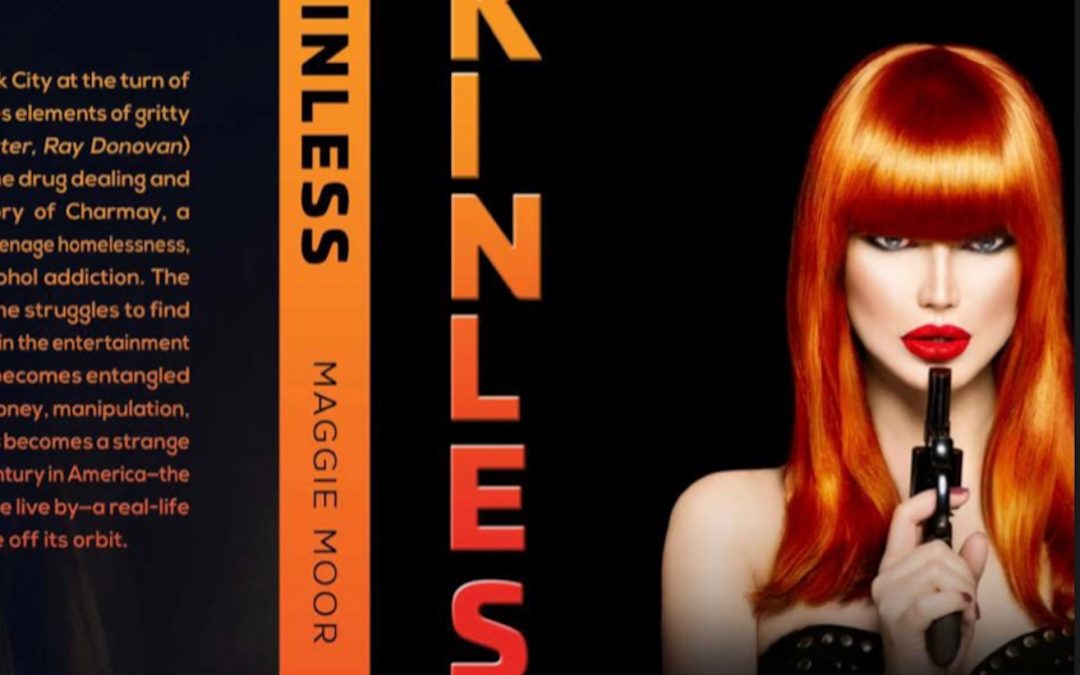 Skinless: The Story of a Female Survivor

“Skinless: The Story of a Female Survivor” is my debut fiction novel. I began writing “Skinless” over ten years ago. Charmay is  character I wanted to create for a TV series, to help empower young women living with a difficult past. I am pleased to announce that “Skinless” will be available to the public on February 26, 2021. I thank Austin Macauley Publishers for taking a chance on a new female writer of psychological crime thriller.

What is Skinless: The Story of a Female Survivor about?

The story is told through the eyes of Charmay, a strong young woman who lives out loud to her own drumbeat, navigating an unconventional life while pursuing her goals of singer/ songwriter at the turn of the Millennium in New York City. Homeless and hitchhiking since her mid teen years, riddled by childhood improprieties and self hatred, Charmay has a chip on her shoulder that empowers her with a keen sense for survival, knowing who the predators are and how to makes tough choices to protect herself in each iconic and gritty New York City experience. A true survivor, Charmay grows through each obstacle and emerges with a deeper sense of self and confidence that only true life experience and reflection can attain.

Why did I write Skinless?

I wrote the character Charmay, and the story “Skinless” as an inspiration to young women, that no matter what life has dealt you, it can become your super power, giving you a strong sense of self protection, confidence and conviction for your goals. None of us can escape our past and many lessons can’t be taught except in life experience. I wrote the character Charmay and “Skinless” to help encourage young women to talk about their experiences, and choices. To learn to become empowered by difficult life experiences, rather than cut yourself down, and feel ashamed. Speak up about it. These are stripes of life, and though traumatic experiences are a difficult way to learn and grow, they make you more aware. “Skinless” was written to serve as a strength building story, a female survivor who can inspire others to excavate and understanding their own lives, and how each experience can be used for growth. As we heal the difficulties can help us harness our inner strength. As we heal, these wounds become self love and a deep capacity for empathy. I wrote “Skinless” to encourage young women to learn from their experiences and pass it on to help others heal.

How did I develop the character Charmay?

I’ve been a therapist for several years. I based this character on my years as a therapist working with women and survivors stories I’ve heard, and experiences I have had in my own life, and my own healing. These stories all collided together to create what would be a fictional character study of a young woman surviving herself and her life at the turn of the Millennium in New York City.

As a writer, a felt that allowing the reader to follow Charmay into the gritty New York City, and the journey of a young woman who is living with these kinds of flashbacks, and anxieties about the future, may elucidate how these experiences affect life decisions, and self protection. I felt that getting inside of her thought processes, her decisions and self doubt become part of the narrative, and gives the reader life examples. For example, childhood traumas may cause a person to think negatively of themselves because it is something that happened to them, and I created Charmay as an empowering example for young women to understand how to value their own life experiences, to respect their own tenacity, and to heal.  By overcoming and healing obstacles in life, we build confidence. It is through the healing that we can find a strength that empowers inner confidence and self love.

How did I come up with the name Charmay for the lead female?

This answer is a bit more “fun fact.” I looked into an earlier draft of “Skinless” from 2014, and found this story. Here, I share it with you.

“The Story of Charmay,” excerpt from a draft of “Skinless: The Story of a Female Survivor,” by Maggie Moor:

“Hey, Charmay!” squawked Jesse, clearly geeked out, paving a beeline my way through scads of drunken late night patrons and leggy, young fawns. Jess was a drummer I’d met a few times while singing at a Nightingale’s jam sesh, East Village. Charmay was my then current moniker in life. I’d been through a few already. This one was delivered to me in a dream. A little girl in a sheer dressing gown, descending endless rows of whitewashed spiral stairs from midnight sky. Fragile thing sunk bare knees to earth reaching out with her unsure longing, desperate to touch. I met her eyes, could see her soul held an amorphous incandescent fluttering, distant horizons from other lands trapped in the hidden closets of her mind. Trembling fingers wrapped around my wrist, she whispered hoarsely, “Cold.” Apparently this maybe had something to with the child part of me asking for help, which apparently I had been chastising since I was about nine. As she faded, she said her name was Charmay. I was so shock-and-awed by this night visit I even told my mother about it on the phone long distance. Well, just the basics. She likes to chat on the phone for hours, and I would rather throw myself over a bridge than engage telephone chat, but I was healing a compression fracture at lumbar one, smack in the middle of my spine, after hurling myself into eventual temporary paralysis at a local library fundraiser in West Marin, Cali. I’d been all excited ’cause I love libraries and didn’t want this one to go under.

I was doing flip circus tricks off a springboard in the Rec Room. It was the end of the library party, had a blast, ready to split, turned to do that last perfect front tuck fly and, well you know the story. Woke up in a hospital bed with a morphine drip, watching elephants float over my foggy head. Funny, I had just taken a book from that library on dance in pre-Hindu religions. Elephants are revered as earth-dwelling deities. Call it a blessing I broke my back ‘cause at the time I was homeless, hitching the Wild West country solo. The whack got me out of crashing cold April showers in Jodie’s old chicken shack. Got me a spot on the couch of two artsy girls who made fresh juices and went to yoga all day. The doctors ordered lie down and surrender. Heal, breathe, stretch, long walks, straight spine, arms swing free, swim as often as you can. I swear, I must have been born for invalid living. Couldn’t stress survival even if I wanted to. My mother mailed me a couple gigantic t- shirts as get well presents to fit over the Judy Blume Deenie-like scoliosis spine straightening brace I had to wear for six months and I indulged her in a few more long telephone jags.

On this particular roundabout Mom shared old family histoire. My Vaudevillian performer great grandparents had an infant named Charmay who died at three months. Mom said she hadn’t thought of this story in years and never pondered passing it on to me. She said nobody in the family ever talked about it.

“Ya know-” she did this throat clearing raspy thing she does “—I don’t know much else, I mean these things happened all the time back then. I know that Charlie and May named my mother for May’s mom and combined both their names for little Charmay.” “Were any birth records instituted,“ I inquired. My attention pinged away from the crayon I was scrawling with while idling with Mom, fire-strewn feathers on the phoenix I’d started months back camping out in Utah. “Or did anyone keep a journal?” I knew Mom had a box of old family stuff, but I never cozied to her yakking memories. On Thanksgivings I’d heard her sis talk about how we had these Vaudevillian song, dance, performer great-grandparents, Charlie Brown and May Newman. Charlie’d run away with the circus as a teen; jumped Gold Rush wagons to San Fran; made his way East, met May. Formed a tap dance duo, toured the world: Vaudeville circuit, 1929 Stock Market Crash Instead of bouncing over to Hollywood Talkies, they’d settled on Coney Island, helped my Mom’s mom raise her daughters, after her flophouse Irish lighting designer baby-daddy had jumped ship. Charlie drove cab, May cashiered at Saks.

“She wasn’t alive long enough. If they had been more religious I’m sure it would have been inscribed in a family Bible or some such, but they were just theatre people.” I laughed. “Yeah, theatre people have their own religions for sure.” I could see Mom’s big smile through the phone. We always could jive in my family over theatre jokes.

I’ve longtime believed in soul evolution through reincarnation. Don’t ask where or when I took that knowledge, just seems natural. It could be I came forth with Charmay’s soul in this lifetime a few generations later.

Maybe my mother wasn’t supposed to be my mother. I could have been her aunt. I’ve always imagined that our souls are borne of this kind of universal life force energy and we’re here to learn lessons. We often travel alongside the same souls or groups of souls. I hate talking about this stuff¬¬; it sounds lofty. But when I was eleven or twelve I’d sit in my room and write about it. I’d go in the closet, shut the door and write letters to the Energetic Flow asking for things that I wanted. Like a boy to like me. Or to get the steps down in dance class. Or for my mom or me to be safe from her crazy boyfriend. I guess I was trying to make sense of things, but eventually I would learn enough lessons that I could exist without my body, my soul would go through enough alchemical cleansing to become vibration and sound; the universal life force light which constructs the galaxies’ necessary energetic holding pattern.

Back to Broadway: “What are you doing here?” Jesse asked. I turned from gazing at endless rows of ruby jewel-lit cars while trying flag a cab, flashed him my best sarcastic smirk.

My Hope is that Charmay and the story “Skinless,” inspires you.

Read reviews and order a copy of “Skinless” ~