Author/ Skinless: The Story of a Female Survivor

As a reader and story lover, do you enjoy getting into the background of a book, inside the writer’s world?

Let’s begin with SKINLESS OFFICIAL TRAILER; SYNOPSIS; HIGHLIGHT REVIEWS (If you Love Skinless, write your own review on GOODREADS).

Follow link at bottom of each page to: My Why, Skinless Overview, Character Breakdown, Main and Sub Themes (excerpts from book), Works Cited.

Skinless takes place in New York City at the turn of the millennium. The plot combines elements of gritty TV drama (The Sopranos, Dexter, Ray Donovan) against a backdrop of small-time drug dealing and violence. Skinless tells the story of Charmay, a female survivor of sex abuse and  teenage homelessness who is caught in the grip of alcohol addiction. The reader follows her journey as she struggles to find her identity while trying to make it in the entertainment industry in New York City.  She becomes entangled in a web of romance, passion, money, manipulation, and longing for intimacy. Skinless becomes a strange evocation of the turn of the 21st century in America—the times we live in and the forces we live by—a real-life portrayal of a world gone off its orbit.

“Maggie Moor has a voice unlike any I’ve ever encountered. Both hip and illuminating. A voice that lifts the mind to a place it’s never been.” – Kate Lardner, Author of Shut Up He Explained: The Memoir of a Blacklisted Kid

“Skinless is a strange evocation of the turn of the 21st century in America—the times we live in and the forces we live by—a real-life portrayal of a world gone off its orbit.” – Cornelia St. Books

“Skinless is a revelation. Meet Charmay.

A wind tapped lightly at heavily drawn aluminum shades, wishing to breathe newness amidst the howling chaos. Me and Sam had one thing to cling to on this banal rock, and that was each other. Well, each other and whatever else we could get our hands on. Bare springs, mattress. Me. Cool air, tawny skin. Long dancer’s limbs, lanky legs. Naked on my back. Gold chestnut waves; my hollow eyes blindly, wide open staring into hue, blue.

Skinless is also a revolution—of survival.

People like me, with the trauma stuff from kidhood, don’t know how to stay in our own bodies. They call it ‘disassociate.’ We rather be in someone else’s body and feel their stuff, cause it’s less traumatic than our own. If you’d told me that back then I would have laughed at you and called you a freakin doctor softee who thinks it makes it better by knowing the reason why. I would have been half right––Knowing why you do what you do doesn’t make it go away or make it feel better. But it does help you start to love and understand yourself better, so at least you have some chance at healing the part of you that wants to kill yourself, and start loving yourself and maybe start wanting to live and feel and grow and find your dreams in the lightness of day. I don’t have all the answers. But I can say, I’m not dead yet, and I know that.

And from Moor, so much more. Quirky, singular, yet strangely familiar characters. A structure that features “past, present, future, all happening at once, inside us.” Language so original it vanishes words as we know them, the use of slang and vulgarity perfected with words and phrasing such as Fuck-o sap suck it, mankym, evening-wheres, or jamorous.

In a word, Skinless is a stunner. “

“Strap Yourself in for a Wild Ride

This book is a hidden gem, apparently a debut work from author Maggie Moor. A story of a young woman Charmay who is raised in a dysfunctional family and sexual abuse from her drunken stepfather which left her jaded with very cynical view of men. This is a narrative in the first person of how she survived raising herself up from the streets of San Franciso and New York City, maneuvering a relationship triangle between her husband who is the local weed kingpin (this took place between the late 90s and early 2000s long before it was legal) who dreams of one day achieving his dream as a famous silver screen actor and a decrepit, rich, clueless old simp who patroned the gentleman’s club where should earn her living dancing. Captivated by her sexual prowess and charm, he would pay her money and buy her high end items simply for just her company. A series of events unfold as things go awry and tension mounts, situations explode.

This is undoubtedly a sharp deviation of what you would expect in a typical crime novel as Maggie Moor’s style of prose has a lyrical and poetic flow that seems to almost emerge from a stream of consciousness that is evocative of beat generation writers like Kerouac, Ginsberg, and Burroughs with the New York City style grit of Jim Carroll. The word play demonstrated throughout this work is phenomenal.

Moor takes you deep into the thought process of the main protagonist, who is sharp witted, resourceful, and dangerous. She can feign sweetness to obtain what she wants from a man but has the ability to spit venom that can emasculate one in the bat of an eyelash. She goes deep into the character’s family background, her opinion of her world, her surrounding extensive knowledge on various subjects from street survival, film and music production, to the art of studying gems. Goes into such deep description of characters and events that you can almost taste it.

Maggie Moor has the ability to bore into your psyche, pull you into the scenes and force you to feel what the characters are going through. “

Skinless: The Story of a Female Survivor published with Austin Macauley Publishing, February 26, 2021. 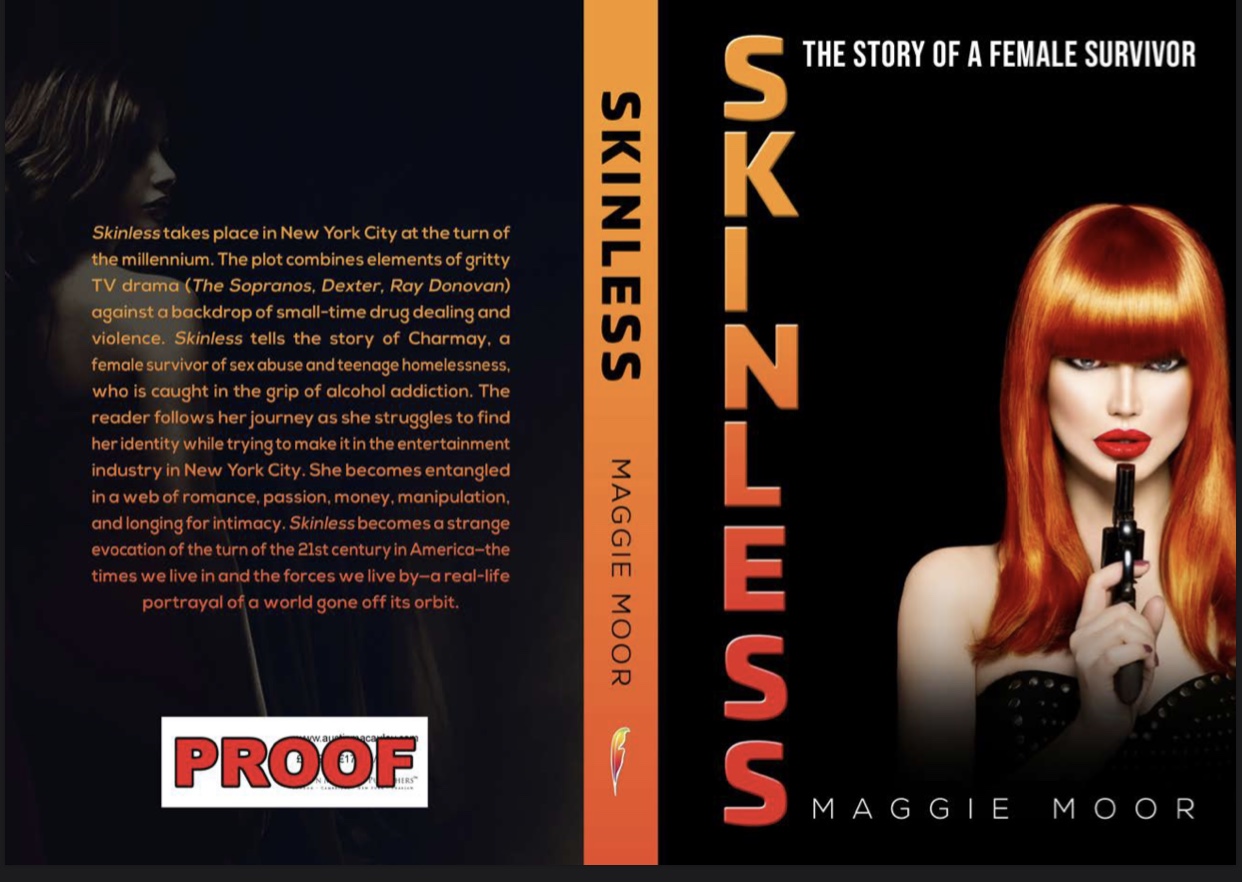 Write a review on any of these Booksellers and Ms. Moor will send you a signed copy of “Skinless.”